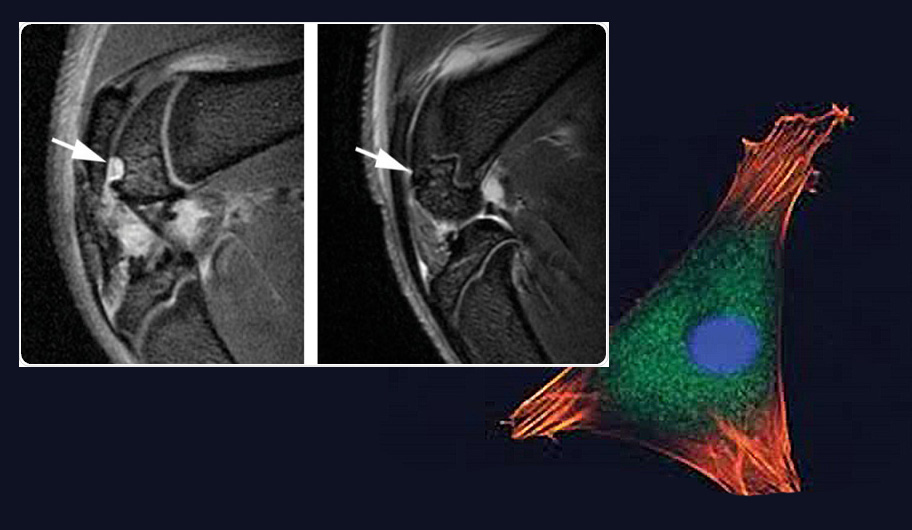 “According to a new study, intravenous iron can be utilized to effectively label stem cell transplants so they can be tracked in target tissues, such as arthritic joints, using magnetic resonance imaging (MRI).”

Transplanted MSCs can help repair damaged joints by promoting generation of bone, cartilage and connective tissue. However, Dr. Daldrup-Link explained that when stem cells are transplanted, they may die and disappear from the transplant site, or fail to differentiate into cartilage.

Consequently, it is necessary to track the stem cells in order to confirm that the transplant has been successful.

Ideally, orthopedic surgeons would like stem cells that have been labeled without the need for additional handling before transplantation.

It was proposed that stem cells could be effectively labeled using in vivo by giving an iron supplement to the donor patient intravenously prior to harvesting. Iron oxide, which can be tracked using magnetic resonance imaging (MRI), would be taken up by the donor cells, including the bone marrow stem cells due to be transplanted.

In vivo cell labeling has been successfully performed in rats by researchers at Stanford University School of Medicine. The rats were injected with ferumoxytol, an iron supplement approved for human use, 48 hours before extracting stem cells from bone marrow. The uptake of iron by stem cells was found to be greater after administration of in vivo ferumoxytol than after the conventional ex vivo-labeling technique.

The labeled stem cells were transplanted into knee cartilage defects of seven rats and tracked with MRI for up to a month (Figure 1, Figure 2). Microscopic examination revealed the presence of iron in the labeled stem cells and proved that repair was ongoing in the damaged joints. Thus, in addition to eliminating the risk of contamination from ex vivo labeling procedures, this in vivo labeling also offers instant feedback on the transplanted cells.

Traditional labelling approaches used to assess whether a stem cell graft has been successful necessitates extensive follow up and imaging studies, which can take weeks or even months to complete, yet the stem cells may have died soon after transplantation. In contrast, the in vivo technique allows the cells to be viewed more quickly so it is soon known if the cells have multiplied too much or if they have disappeared from the transplant site.

Since the iron solution used for in vivo labelling is extensively used for the treatment of anemia, it is already known to be safe for use in man. However, further studies in rabbits are planned before the technique will be studied in humans.

Magnetic Resonance Imaging for Cell Tracking
These findings highlight the importance of MRI in stem cell tracking. For example, there is the potential for using MR-compatible catheters to monitor the precision of cell injection in real time.

The ability to track MR-labeled MSCs offer unlimited applications beyond the clinical treatment of damaged joints. Jeff Bulte, director of cellular imaging at Johns Hopkins University’s Institute for Cell Engineering in Baltimore, Maryland, described how the technique offers many potential applications, including the repair of heart and brain neurons.

Non-invasive monitoring of the accumulation and movement of stem cells, will allow clinicians to determine whether cell delivery has taken place in the appropriate site.

Disadvantages of Iron-oxide Labeling Approach
Despite its obvious advantages, the iron-oxide labeling approach does have certain drawbacks. A key deficiency is the lack of ability to differentiate living cells from dead cells. It is also difficult to distinguish between macrophages and labeled MSCs.

Furthermore, since all donors do not produce adequate numbers of MSCs, efforts to obtain an adequate number of cells may dilute the ferumoxytol label to such an extent that it is difficult to detect at the cellular level.

Such limitations could potentially be addressed by using fluorine labeling of stem cells. Fluorine resonates at a different frequency from hydrogen, and so it is possible to adjust the MRI coil to its specific frequency.

Since the human body has little or no fluorine naturally, the signal from the labeled fluorine can be easily distinguished from the background noise and the amount of the labeled stem cells can be accurately determined. In 2013, the fluorine labeling approach was tested in a patient at the University of Pittsburgh Cancer Institute, and studies are ongoing.