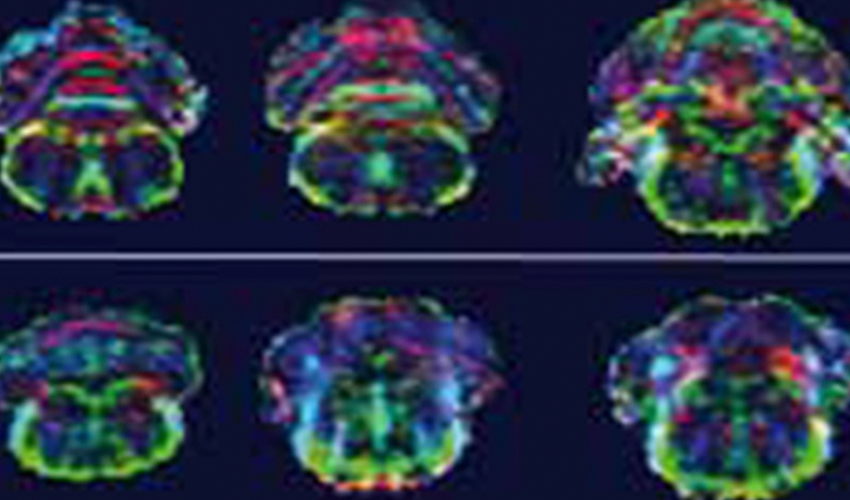 “Diffusion MR imaging opens a new way to investigate the impact of neuropsychiatric conditions such as drug, alcohol addiction, fear or depressive like behavior on connectivity.”

Until very recently, the study of neural architecture and its integrity in animal models was exclusively done by using histology-based imaging modalities applied to fixed brain tissue. A non-invasive detailed insight into the brain’s microstructure and axonal connectivity in vivo has only become possible since the development of diffusion tensor magnetic resonance imaging (DT-MRI). The technique relies on the phenomenon of diffusion of water molecules in tissue.
For each voxel of the image the diffusion tensor describes the magnitude and directionality (anisotropy) of the water movement, providing a unique composite contrast that reflects the tissue characteristics. Tractographic algorithms are using this information simultaneously delineate multiple fiber tracts three dimensionally and to identify alterations in the brain structural connectivity.

Fig.1: Reconstructed wild type mouse brain fibers from in vivo DT-MRI acquisition at 9.4T. A: Frontal view, B: Lateral view. Stria terminalis is seen as the major output pathway of the amygdala, projecting from its corticomedial division to the bed nucleus of stria terminalis and hypothalamus (blue). Also the cortico-amygdaloid pathways are detectable (red), Thalamocortical projections (green).

DT-MRI using 4-shots DT-EPI sequence with high number of gradient encoding directions (30 to 45) allows a three-dimensional characterization of the cerebral tissue, being able to capture a large amount of detailed anatomical information in a non-destructive manner. Major white matter tracts can be reconstructed but also fine grained mapping of rich axonal projections crossing gray matter regions can be revealed (Fig. 1).

An example is the complex connectivity of the amygdala, the core structure of the limbic system.  As in the case of the amygdala, the thalamus, another gray matter region, sends axonal projections to the cerebral cortex. Figure 2 shows the architecture of the thalamocortical projections in wild type mice. All this opens a new way to investigate the impact of neuropsychiatric conditions such as drug, alcohol addiction, fear or depressive like behavior on connectivity. Moreover, the color coded images that can be obtained from the diffusion data provide also morphological information and can be of high value in screening the brain morphology of mutant mice. An example is given in Fig. 3.

DT-MRI remains so far the only methodology able to distinguish and evaluate the axonal and myelin damage in vivo and non-invasively. Such brain connectivity studies in small animals are challenging but achievable now using developments in the MRI technologies and post-processing algorithms. DT-MRI is able to provide images of rotational invariant parameters of the diffusion tensor, such as fractional anisotropy (FA), volume ratio (VR), axial (λ1), and radial [(λ2+ λ3) /2] diffusivity. These parameters are used for quantitative evaluation of micro structural modifications in developmental and pathological conditions. Results suggest that increased radial diffusivity could serve as a surrogate marker of demyelination while the reduced values of axial diffusivity are observed in brain areas of axonal damage. The histopathological investigation shows this type of correlation (Fig. 4).