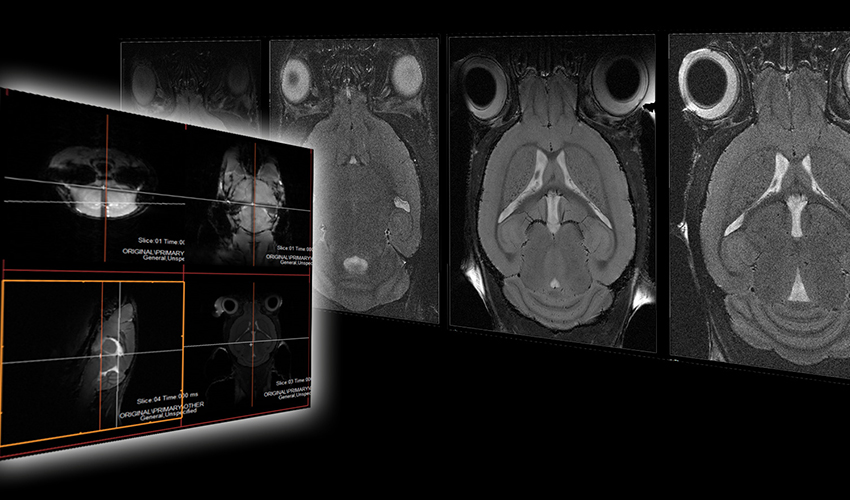 Cryogenically cooled resonators (CCRs) are a recent addition to small animal imaging applications. CCR use has provided substantial gains in SNR, making them a valuable tool even for high-field small animal MRI.

This study investigates their potential for imaging at 500MHz, in particular testing high-resolution brain imaging and functional cardiac imaging.

Noise in the final MR image is mainly dominated by two factors – RF emission due to the thermally driven Brownian motion of electrons within the body’s conducting tissue, and electronic noise introduced by the whole receive chain of the MR scanner (receive coil, electronics, etc.).

At mid and high fields, usually the patient is the dominant noise source. But in small animal MRI the imaged volumes being measured are of a size that renders the sample noise contribution comparable or even smaller than the thermal noise contributions of the receiver system, even at high magnetic fields. Thus reducing thermal noise significantly increases overall SNR [1].

Cooling of RF probes was an early idea in NMR, but recently, CCRs have been applied to in vivo small animal imaging realizing substantial SNR improvements by up to a factor of 4 compared to conventional room- temperature probes [2, 3], even higher for dedicated applications such as rapid cardiac imaging [4].

According to theory, the possible gain in SNR for CCRs scales inversely with the field strength. However, for small resonators as e.g. applied for mouse brain imaging – even at 500MHz – significant SNR gains are expected, enabling faster imaging or higher spatial resolutions.

Animal Preparation
Measurements on three wild-type mice (C57/B6) were carried out under isoflurane (3% for induction and ~1.5% for maintenance) anesthesia, with physiology monitored by an MR compatible small animal monitoring system.

With breathing frequency maintained between 50-65 cycles per minute, and body temperature controlled, the mice were prone or supine depending upon the probe in use.

Brain MRI Protocol
Para-coronal slices were acquired. To ensure reproducible acquisition geometry, the image plane was aligned with the mid-sagittal line (rotation around AP axis) and the cortex (rotation around the FH axis) as shown in Fig 1.

No rotation around the RL axis was performed to minimize B1-induced intensity modulation across the image. For CCR acquisitions, the reference gain was optimized in the central slice of the imaging stack, the extent of which was kept below 3mm to avoid substantial B1–variation over its extension.

The evaluation of the performance for cardiac applications was based on 2D and 3D cine acquisitions. For 2D acquisitions (CINE2D), cine images were acquired in 2 chamber, 4 chamber and short axis geometry (Fig. 2).

The volume was aligned with the long axis of the heart. The great vessels were thoroughly excluded from the excitation volume to minimize blood saturation ensuring sufficient blood-myocardium contrast.

Signal-to-noise ratios (SNR) were calculated according to:

For the brain data the average SNR of 4 segments of the left and right hemisphere was used for SNR comparisons.

For the cardiac data, the mean SNR was calculated independently for the anterior, septal, lateral and posterior wall. SNR comparisons were restricted to the 2D acquisitions, becuase, in 3D, parallel imaging was used.

Statistical relevance of the results was analyzed by a paired Student’s T-test assuming a heteroscedastic variance of the two samples. All ROIs were chosen at similar locations to ensure a fair comparison of the results.

Direct comparison of the images acquired with the different investigated coils and imaging protocols reveals a significant increase of SNR with the CryoCoil (bottom row) as shown in Fig. 4.

The respective SNR analysis clearly shows a more than threefold gain in SNR for all investigated protocols (Fig. 5, top). All improvements were highly significant (p-value < 0.01).

In reconstructed SNR maps, a clear increase in the SNR can be appreciated in all regions of the myocardium (Fig. 7).

Figure 7: SNR maps for the 4-element cardiac array coil (a) and the CryoProbe (b)

The mean gain in SNR (Fig. 5, bottom) with the CCR was 2.8, with individual improvements of 2.65 (anterior), 2.75 (septal), 2.85 (lateral) and 2.95 (posterior). All improvements were highly significant (p-value < 0.01). Interestingly, the strongest gain was obtained in the posterior region of the myocardium indicating a more homogeneous sensitivity profile of the 2-element coil, which can also be appreciated in the 2-chamber view (Fig. 8).

Reconstruction of the 3D CINE data yielded sufficient image quality and contrast for the evaluation of the contractile motion (Fig. 9). Mean CNR/SNR resulted in 0.46/7.5 for 2D and 0.29/9.8 for 3D. From the isotropic 3D data the conventional 2-chamber, 4-chamber and short axis views could be retrieved by multi-planar reformatting (Fig. 9).

In this study, it could be demonstrated that even at 11.7T a significant improvement in SNR can be obtained through the application of a CCR. In direct comparison to four-element room temperature surface coils, significant SNR gains in the order of 3 were obtained in both brain and cardiac imaging.

Surprisingly, even for rather deep-lying structures such as the posterior sections of the myocardium, a clear gain in SNR could still be observed by the CCR. This clearly indicates a less severe drop in B1, with increasing depth, than expected. The gain in SNR facilitates rapid imaging at high spatial resolution. For conventional imaging applications, the primary gain in applying CCRs is the significantly reduced scan times.

Considering the high gain in SNR, acquisition times can be reduced by 75% without sacrificing image quality when compared to the conventional room-temperature coil approach. This may become of special interest for high volume imaging sites for substantial increase of throughput. Yet more relevant may be the potentially higher spatial resolution that the CCR technology enables.

In diffusion tensor imaging (DTE) in vivo acquisition times in the order of 110 minutes have been reported for a decent coverage of the murine brain with sufficient diffusion directions. By using the CCRs, the acquisition time for a similar acquisition protocol can be reduced to about 30 minutes, while simultaneously improving the spatial resolution by a factor of 2 [5, 6]. Similar gains can be expected for dedicated applications demanding high spatial resolution, such as the direct visualization of cellular layers in the mouse brain [7], where the shown imaging protocols indicate the potential for substantial scan time reduction without any sacrifice in spatial resolution.

Wagenhaus et al. [4] showed the benefit of high-resolution cine imaging using CCRs at 9.4T. With the suggested 3D imaging protocol facilitating isotropic spatial resolution, cardiac imaging in the mouse may become less dependent on the scan geometry planning and the subsequent selection of the analysis planes may further reduce user dependability of the results.