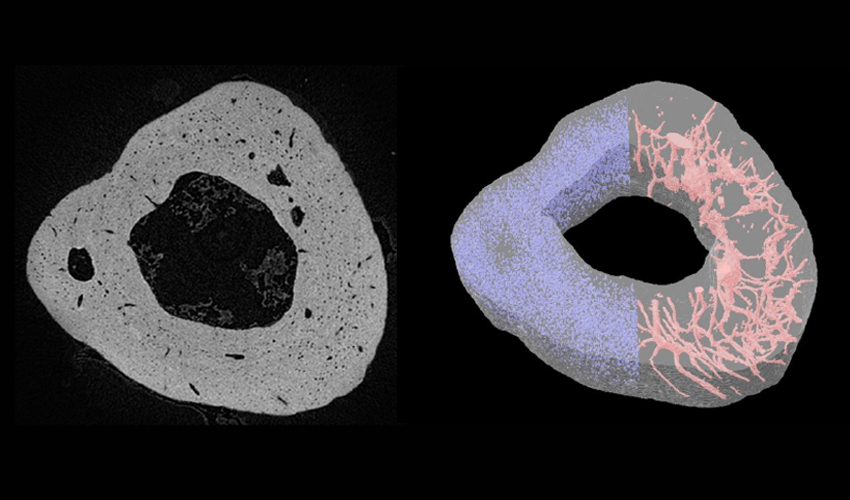 The Osteocytes are the most commonly found cells in mature bone tissue. They have a stellate shape and are approximately 7 micrometers in diameter by 15 micrometers in length. In mature bone, osteocytes and their processes reside inside spaces called lacunae or pits and canaliculi, respectively. Although osteocytes have reduced synthetic activity, they are actively involved in the routine turnover of bone matrix, through various mechanosensory mechanisms. They destroy bone through a rapid, transient (relative to osteoclasts) mechanism called osteocytic osteolysis. Blood vessels on the other hand are responsible for oxygen and nutrient delivery and waste removal, via the circulating blood. Vascular pores are relatively large and can be picked up even with medium-resolution scans. However, detecting osteocyte lacunae requires much higher resolution. Fortunately, current microCT systems allow scanning bone at sub-micron resolution allowing 3D characterization of intracortical vascular porosity and osteocyte lacunae.

Method note “MN058_Visualisation and analysis of the osteocyte lacunae and blood vessel network in cortical bone”* will explain step by step how to separate, analyze and make 3D models of the osteocyte lacunae and the blood vessel network inside the cortical bone automatically. The discrimination between the large vascular pores and small osteocyte lacunae can be done based on size. However, the principle of this analysis task list is based on open versus closed porosity. Osteocytes are completely embedded in the mineralized bone matrix and can thus be considered closed pores. Vascular pores on the other hand can be considered open pores as blood vessels run through the cortical bone and exit the bone at some point. A similar approach can be applied to several other samples or objects when making separate surface rendered 3D models of the open and closed pore network, including geological drill cores.

*This is available on a member-only portal, please register to download the method note.