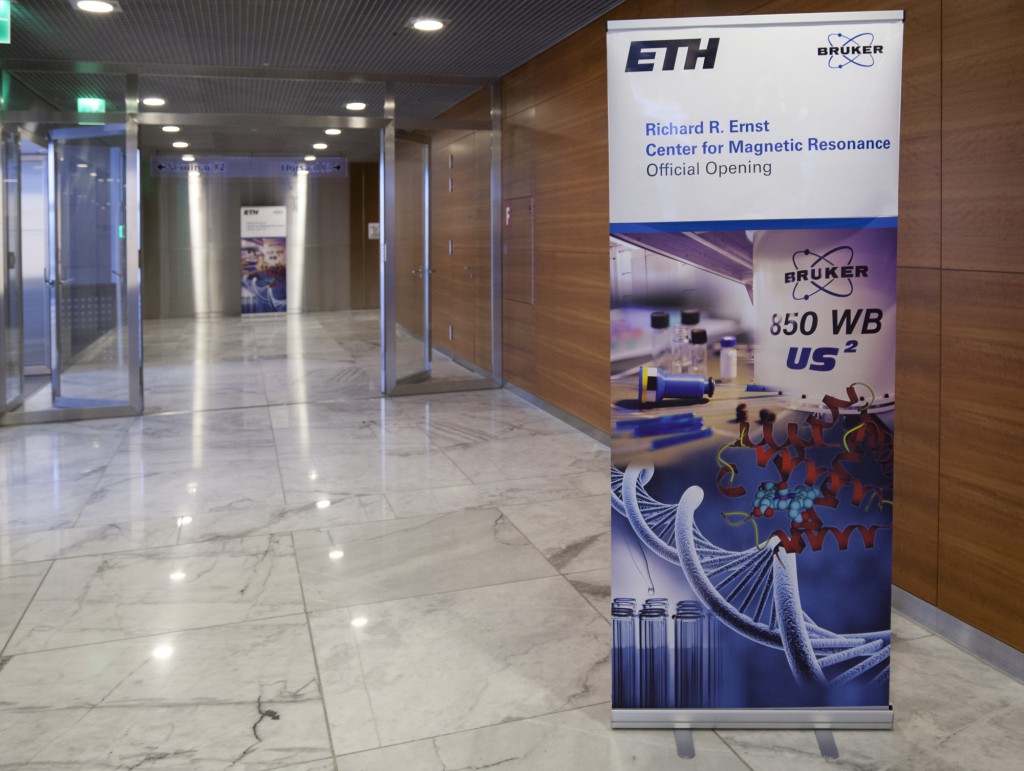 “Based on an idea from Prof. Beat Meier (ETH Zurich) and Dr. Werner Maas (Bruker BioSpin), a plan was constructed to honor the longstanding cooperation between ETH and Bruker by the establishment of a special Center of Excellence at ETH.”

A key player in ETH and Bruker’s longstanding cooperation, Nobel Laureate Richard Ernst, has graciously accepted to lend his name to this endeavor and Tuesday, September 18 2012 saw the inauguration of the Richard R. Ernst Magnetic Resonance Facility at the ETH (Eidgenössische Technische Hochschule) in Zurich, Switzerland.

This new facility, co-sponsored by Bruker, will be dedicated to solid-state Nuclear Magnetic Resonance (NMR) research at ultra-high magnetic fields.

As befitted the occasion, the opening began with a scientific symposium which led on to a formal opening ceremony and dinner, organized by Bruker BioSpin and ETH Zurich.

The afternoon symposium featured an enjoyable program of talks by leading scientists from all over the world and was attended by a large number of faculty and students from ETH as well as Bruker representatives.

Anja Böckmann from CNRS Lyon led the proceeding s with “NMR and the birth of fibril structural biology” and was followed by notable talks by Robert Griffin from MIT, Cambridge; Hartmut Oschkinat  from FMP, Berlin; Gerhard Roth from Bruker BioSpin and Kamil Ugurbil of the University of Minnesota, Minneapolis.

The talks highlighted the continuing development of Magnetic Resonance technology and methodology, and included high field Dynamic Nuclear Polarization, solid-state NMR in biology, challenges in high field magnet technology, and the use of cutting edge MRI in the pursuit of Brain Function and Connectivity.

The official opening ceremony took place in the Experiment Hall, from now on known as the Richard R. Ernst Magnetic Resonance Facility, and began with a welcome aperitif and some inspiring words from the key partners in the facility.

At the formal dinner that followed both Prof. Ernst and Tony Keller from Bruker BioSpin spoke personally of the long and successful history of collaboration that began in the earliest days of Bruker.

Tony Keller at the formal dinner

Apart from honoring the achievements of Richard Ernst and the history between Bruker and ETH, this event also inaugurates a new chapter in collaboration.

Beat Meier will acquire a 1.1 GHz widebore magnet, which will be the world’s first, and which will present both unique chances as well as unique challenges. This is of course where the combined strengths from ETH and Bruker BioSpin will aim to achieve more than the sum of its parts, hopefully resulting in new science and opportunities well beyond ETH.

It also signals the continuation of ETH as a major force in Magnetic Resonance with, in addition to Beat Meier, a host of world-class scientists playing a part, such as Matthias Ernst, Rland Riek, Gerhard Wider, Frederic Allain and Christophe Coperet in NMR, Markus Rudin and Klaas Pruessmann in MRI and Gunnar Jeschke in EPR.

Werner Maas commented, “The synergistic relationship between the ETH researchers and Bruker has accelerated the development of both instrumentation as well as methodologies, thus providing a benefit for the entire magnetic resonance communities. We believe that this synergy will be reinforced with the establishment of the Richard R. Ernst Magnetic Resonance Facility”.