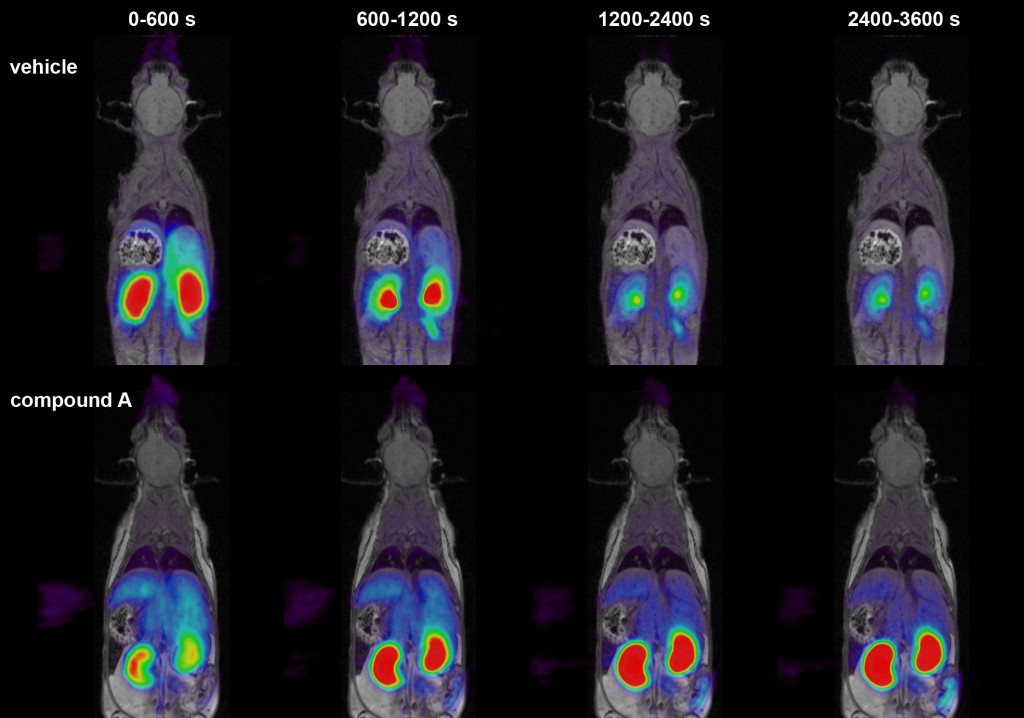 Fluoroquinolones (FQs) are an important class of antibiotics with a broad spectrum of activity against Gram-negative and Gram-positive bacteria. Their antimicrobial activity interferes with DNA unwinding and blockades the DNA replication fork, which ultimately leads to fragmentation and death of the bacterial cell (1). At the physiological pH range, FQs exist predominantly as ionized molecules either in anionic, cationic or zwitterionic form. Their polar nature restricts movement of FQs across biological membranes, making active and facilitated transport processes the major determinants of FQ absorption, distribution and elimination.

FQs are often used to treat urinary tract infections. They are eliminated via the kidneys, leading to high concentration levels in kidney tissue and urine. Urinary concentration levels exceed those in plasma severalfold, suggesting that active transport processes are the key determinants of renal excretion of FQs. In kidney proximal tubule cells, transport processes are mediated two large families of transmembrane transporter proteins, the solute carrier family and the adenosine-triphosphate binding cassette (ABC) transporter family. Both use cellular energy, either in the form of electrochemical gradients or ATP-hydrolysis, to transport compounds against concentration gradients.

It is likely that compounds interacting with one or several these transporters may change FQ disposition and pharmacokinetics. Similar systems reside in other critical tissue barriers such as the blood-brain barrier (BBB), the intestinal wall and the sinusoidal and canalicular membrane of hepatocytes. These transporter-mediated drug-drug interactions (DDIs) may give rise to a number of adverse effects.

These range from relatively mild effects on the gastrointestinal tract to serious effects on the central nervous system (CNS). Some FQs have even been withdrawn from the market because of the risk of renal or hepatic failure(4). The association of several FQs with severe cardiac effects, tendinitis, tendon rupture and exacerbation of Myasthenia Gravis led to a boxed warning issued by the Food and Drug Administration. Although these effects occur only rarely, they severely restrict the clinical use of FQs.

The molecular mechanisms causing these adverse effects are not entirely understood. Some, such as renal failure or CNS effects, may be linked to transporter-mediated DDIs. However, several of these transporter-mediated-DDIs do not manifest themselves in increased plasma concentration levels of the affected FQ, so the assessment of FQ concentration levels in peripheral tissues is of interest to detect or predict a potential DDI. This is difficult to investigate in humans due to the invasive nature of tissue biopsies.

Positron Emission Tomography (PET) is a nuclear imaging technique for non-invasive determination of the concentration of a radiolabelled drug in tissues. PET utilizes the radioactive decay of positron-emitting radionuclides, such as fluorine-18 or carbon-11, to track the localization of a radiolabelled drug in the body. In addition to its non-invasive nature, the advantages of PET are its high sensitivity (only a few µg of the radiolabelled compound is required) and its high temporal resolution, enabling the detection of concentration changes in tissues within several seconds. However, spatial resolution is limited (~ 2 mm), as is anatomical information, which can make it difficult to allocate the signal to designated organs or tissues.

All FQs contain fluorine, so they can be labelled with fluorine-18 for PET imaging without structural modification. In contrast to PET, Magnetic Resonance Imaging (MRI) delivers anatomical information with high spatial resolution and excellent soft-tissue contrast. Excretory organs such as kidneys and liver can be visualized clearly without additional contrast agents. Combined PET and MRI is valuable in preclinical and clinical research, because it simultaneously provides functional and anatomical data on drug distribution.

In this study we assessed the potential of a drug (Compound A) to interfere with the renal elimination of a radiolabelled FQ antibiotic. In previous in-vitro test assays, Compound A showed affinity to one or more drug transporters, and a combination with FQ antibiotics may be clinically relevant. We performed sequential MRI/PET measurements on pre-treated, anaesthetized mice with the radiolabelled FQ antibiotic. The images were co-registered and kidney concentration levels were further quantitated, to obtain pharmacokinetic data.

The technical challenges of this project lie in the use of two different scanner systems and the rapid, secure exchange of animals from one to the other. In order to obtain images suitable for co-registration, body movement must be kept to a minimum. A transformation matrix must be calculated, to correct the position mismatch of the reconstructed MRI and PET images.

Animals: Female FVB wild type mice, aged 8-12 weeks, weighing 20-30 g were housed in groups in individual ventilated cages under controlled environmental conditions. Animals were allowed to acclimatize >1 week. The study was approved by the local Animal Welfare Committee in accordance with the Austrian Animal Experiments Act. All efforts were made to minimize the number of animals as well as pain or discomfort.

Anaesthesia and Monitoring: Anaesthesia was initiated using 2.5 – 3% isoflurane in oxygen and maintained at 1 – 1.5% for the imaging procedure. Body temperature and respiratory rate were monitored constantly throughout the experiment. Animals were positioned prone on the mouse bed and body temperature was maintained by warm water heating.

Pretreatment: Animals received either compound A dissolved in phosphate-buffered saline or vehicle solution by intraperitoneal injection 30 minutes prior to start of the PET scan. Total injection volume was 0.5 mL.

PET: After MRI, the animal holder was transferred to a Siemens microPET Focus220 system and secured using a custom mounting plate. A 10 minute transmission scan was followed by a 90 minute emission scan, started at time of intravenous injection of approximately 8 MBq radiolabelled FQ antibiotic (injection volume 0.1 mL). The PET emission data was sorted into 25 frames, incrementally increasing from 5 seconds to 20 minutes. Images were reconstructed using Fourier rebinning followed by two-dimensional filtered back projection. The reconstructed PET images consist of a 128x128x95 matrix with a final resolution of 0.4×0.4×0.8 mm. The standard data correction protocol (normalization, decay correction, injection decay correction and attenuation correction) was applied to all datasets.

Image Analysis: Images were co-registered using AMIDE medical data examination software (5). A transformation matrix was calculated by imaging a phantom, consisting of a polypropylene cylinder filled with a mixture of H2O, CuSO4 (1 g/L) and NaCl (3.6 g/L), in which a flexible tube containing fluorine-18 solution was inserted. Position mismatch was calculated by alignment of the intersections of the flexible tube in the MRI and PET images, resulting in a transformation matrix. After applying this transformation matrix to the animal data, regions of interest were drawn manually over the kidneys in the fused MRI/PET images and time-activity concentration curves from 0 to 90 minutes after injection of the radiolabelled compound were derived.

Both imaging systems were in the same room, enabling quick transfer of animals. The integration of anesthesia, animal warming and respiratory trigger in the Bruker animal holder allowed exchange between systems without interruption. All PET scans were performed after MRI with the mouse bed and mounted mouse whole body coil. This set-up minimizes movement of the subject; however, the mounted coil increased attenuation and scatter for the PET measurements, corrected by attenuation correction scans. A mounting plate was constructed to safely and reproducibly mount the Bruker animal holder on the PET system. This mounting plate consists of a bottom plate that fits exactly on the bed moving mechanism of the PET scanner, a fixable clamp to secure the animal holder, a mounting guide to prevent rotation and 4 adjustable screws (Figure 2a).

Figure 2a: Custom mounting plate for reproducible positioning of the animal holder

Using the same positioning parameters of the bed moving mechanism of the PET scanner, a reproducible position inside the center field of view could be achieved (Figure 2b). All MRI and attenuation measurements could be performed within the 30 minute pre-treatment phase of vehicle or compound A, prior to injection of radiolabelled FQ.

Figure 3a shows the phantom constructed to calculate a transformation matrix for image co-registration. At least 5 aligned intersections were clearly visible in all images, allowing placement of sufficient fiducial markers to calculate the position mismatch (figure 3b). The mean registration error was < 0.2 mm, and deviations caused by rotation were almost negligible.

Figure 3a: Phantom used to calculate the transformation matrix

Figure 3b: Transversal PET (left) and T1-weighted gradient echo MRI (middle) views of the phantom. The flexible tube of fluorine-18 solution can be clearly distinguished in both imaging modalities. A transformation matrix was calculated by placing fiducial markers at the 5 intersections visible in both images, and rotating and transforming one dataset (right).

This study confirms that compound A has the potential to interfere with the renal elimination of FQs. The delayed uptake in kidney tissue suggests the interaction of compound A with a basolateral uptake transporter that regulates uptake of FQ from blood in the kidneys. Compound A also seems to inhibit apical transporters governing the excretion of FQs from kidney to urine. From that point of view, it seems likely that compound A has the potential to cause transporter-mediated DDI in vivo. This study shows that combined MRI and PET imaging is a feasible and valuable tool in drug development.