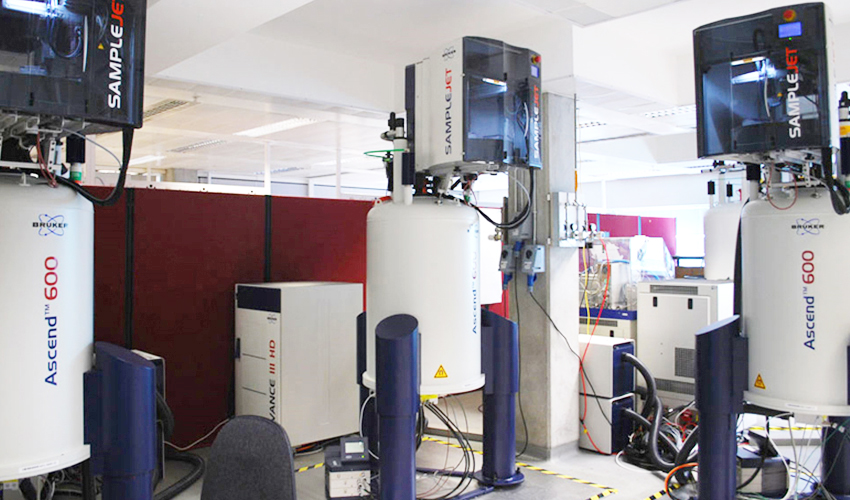 The event saw the UK Minister of State for Universities and Science, David Willets, and the UK Chief Medical Officer, Professor Dame Sally Davies, voice their pride and support for the centre, which heralds the beginning of a revolutionary chapter in healthcare diagnoses and treatment using cutting edge NMR and mass spectrometry technologies.

Jointly funded by the National Institute for Health Research (NIHR) and the Medical Research Council (MRC) and industrial partners that include Bruker, the new Centre puts the UK at the forefront metabolomics research.

An unprecedented large-scale screening program will utilize phenotyping to both develop new, world-leading diagnostic capabilities, and develop better targeted treatments for patients with a wide range of common diseases such as diabetes, heart disease and dementia.

Guests were then given an exclusive tour of the Centre’s new facilities in Hammersmith.

After lunch guests were transferred to the Centre’s other location in Imperial’s South Kensington Campus, and given an introductory tour and explanation of the Centre’s NMR instrumentation and wider facilities, concluding with the opening of the Imperial Phenomics Training Centre.

“The sequencing of the human genome generated a lot of excitement among scientists and the public, but studying our genes has revealed less than we had hoped about common diseases such as cancer, diabetes and heart disease”, said Professor Jeremy Nicholson, Director of the National Phenome Centre and Head of the Department of Surgery and Cancer at Imperial College.

He continued, “By studying the phenome we can examine the effects of our genes, our lifestyle and our environment. What you do, what you eat, where you live… these matter as much as your genetic make-up. What we discover about the causes of disease can be used to inform healthcare.”

New high-throughput technologies such as NMR and mass spectrometry hold great potential due to their ability to look at as many metabolites as possible. This research will help associate any metabolite with a given disease thus enabling further research into that metabolite that could indicate a variety of causes–nutritional differences, environmental exposure, or even mutations in metabolic pathways.

Bruker has long been a partner of Imperial College and has, over the past fifteen years, formed strong collaborative bonds with Prof. Nicholson, helping to establish the powerful metabolic screening tools that now drive the Centre’s research.

The Centre, equipped with three Bruker AVANCE III 600 MHz NMR spectrometers and up to 12 mass spectrometers, will bring molecular analysis technologies to the forefront of clinical decision-making.

Drawing on Imperial College’s pioneering expertise in metabolic profiling science, and combined with Bruker’s cutting-edge, high throughput high resolution NMR technology, the Centre will analyze up to 100,000 blood and urine samples per year.

Using its unique capacity to perform parallel assays, the Centre will conduct large-scale in-depth analysis of biological samples, both exploratory analysis (untargeted) and targeted analysis, that will directly advance new methods for analyzing new classes of metabolites and for interpreting the masses of data generated.

The sheer analytical capacity of the Centre is unmatched in the world – it will create as much data as CERN, running into gigabytes per minute!

This data will help explain why certain people are more susceptible to disease than others. This in turn will enable faster and more accurate diagnosis and inform the development of new drugs and treatments.
The aim is to enable doctors to diagnose illness and select the optimum treatment based on a patient’s phenome – the complete set of their biological characteristics determined by both genes and environment.

“It will also allow us to see how individual patients respond to different treatments over time. For example, we could quickly discern whether a cancer patient is responding to chemotherapy and if not, switch to a different treatment, without wasting valuable time. And the data we gather will mean that, ultimately, we will be able to predict which treatments will work for which patients, based on their phenome,” said Prof. Jeremy Nicholson.

Dr Manfred Spraul, Director of Applied NMR business development at Bruker BioSpin GmbH, said “Based on long-lasting and very successful collaborations with Professor Jeremy Nicholson at Imperial, Bruker is pleased to actively contribute to the new MRC-NIHR Phenome Centre and help revolutionise the understanding of the causes and mechanisms of disease”.

“Nuclear magnetic resonance and hyphenated technologies, together with improved biofluids and tissue data analysis, will enable personalised phenotyping using top-down system biology tools combined with conventional clinical diagnostics and patient information. We consider the centre to be the crystallisation point for a future network of phenome centres around the world.”

The Centre’s facilities have sparked significant interest worldwide. Used as a template for phenotyping centers it could be rolled out globally, creating a worldwide network for global collaboration. There is already a high international demand for knowledge transfer.

Thanks to donations of additional equipment from Bruker, the centre includes a state-of-the-art international training facility. This will enable students, scientists and doctors from around the world to gain hands-on experience in using analytical technology to study the human phenome. The Training Centre is already planning to run training courses in a number of languages, from Spanish to Mandarin Chinese.