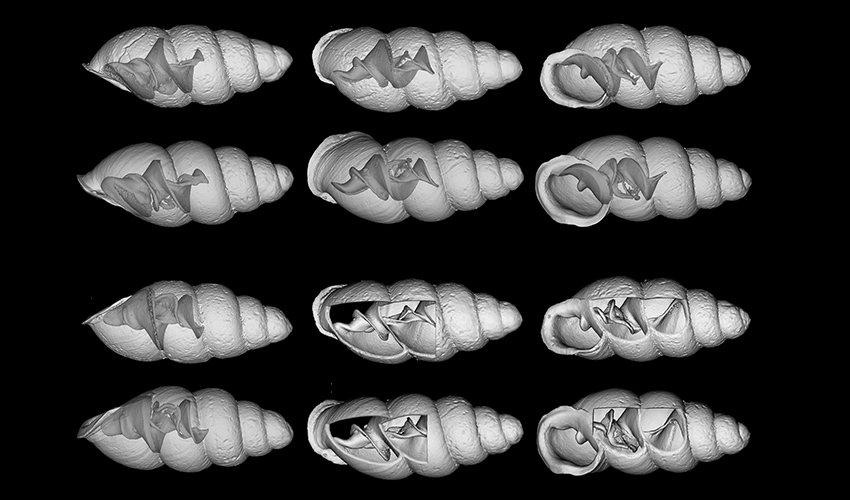 Thorn snails are small, fragile snails that assist in the decomposition of leaf litter in mostly temperate and tropical environments. These mollusks co-inhabit leaf litter, assisting in nutrient release into the soil.1 Some of these snails are less than 2 mm in length, representing one of the smallest snail species on the planet. Three newly discovered species of thorn snails—Carychium hardiei, Carychium belizeense, and Carychium zarzaae—have been identified using computed tomography (CT) imaging in a study by Dr. Adrienne Jochum et al. This type of technology, often used in life science and studies, has recently been utilized in the field of zoology on a micro scale.

The three previously unknown species of thorn snails to be identified, join the ranks of the 14 currently identified thorn mullosks.2 These snails were discovered accidentally, inhabiting mostly North and Central America. Due to their relatively small size, microCT by Bruker Instruments was used to determine the structure and formation of each species. This more compact form of “nano” CT creates images of small samples at the most minute level with a high resolution.

Dr. Adrienne Jochum, who discovered one of the snails (Carychium hardiei) during a trip in North America, published the identification results on the application of nano-CT in micro snail identification in ZooKeeys.3 Jochum and colleagues specifically used Bruker’s microCT imaging technology for comparing, identifying, and determining the structure of three new Carychium species: Carychium hardiei, Carychium belizeense, and Carychium zarzaae.

Researchers believed the microCT approach to be the most appropriate imaging modality due to the snails’ small anatomical features. The findings of this imaging technique for each species were as follows:

• Carychium hardiei: This species featured a greater bulbous protoconch and a thinner peristome than currently known species. When compared with C. mexicanum, CT imaging found that C. hardiei had a bigger and more tapered shell.
• Carychium belizeense: Researchers gained a side view aperture-left profile image of the species with the microCT. Imaging analysis revealed that the C. belizeense species had 4-5 highly convex whorls, or a 360° revolution found in the shell’s spiral. When compared with C. hardiei, C. belizeense featured a larger and more robust shell with substantially more whorl convexity.
• Carychium zarzaae: CT analysis compared this new species with the Panamanian lineage, finding C. zarzaae featured a much thinner shell. Additionally, researchers found that its peristome formation and superficial teleconoch striation was similar to those seen in the C. belizeense and C. hardiei species.

Although commonly used in life science and preclinical studies, the use of Bruker’s microCT instrumentation represents an evolving trend in the field of CT imaging.4,5 With the integration of this technology in zoology research, environmental professionals and researchers can understand nature at its minute level. Using this information, they can also gain insight into how natural elements, insects, and animals work together to support soil health.

As shown by this study, researchers were able to access glimpses into a new set of thorn snail species, probing the inner structures of each thorn mollusk. The imaging system offered by Bruker also includes software which allows researchers to render 3D images of a sample’s microstructure and morphology, technological features that are important for small samples in all aspects of science.6