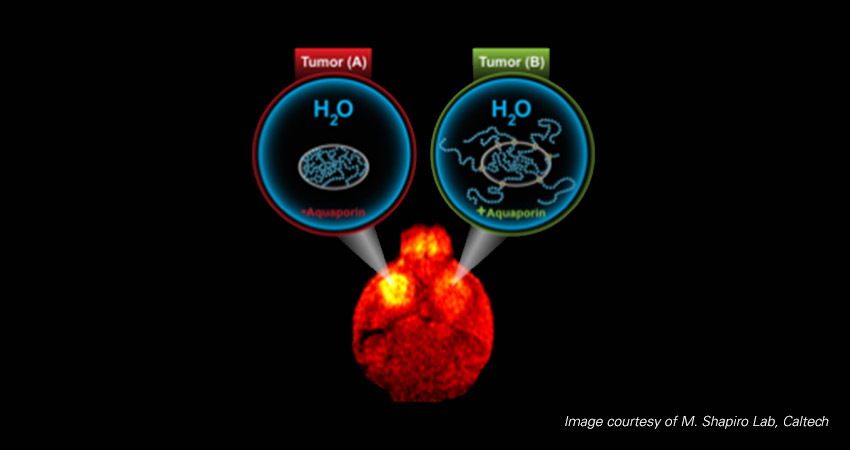 Earlier this year, the scientist who invented MRI, Peter Mansfield, died. In 2003, Mansfield received the Nobel Prize for his work. That same year, Peter Agre was awarded a Nobel for discovering aquaporin, a cell membrane protein that works as a water channel.

Recently, a team from Caltech coupled those Nobel-worthy breakthroughs and found a new way to map genetic activity in cells deep within a living mammal. The researchers created a novel “reporter” gene, one made with aquaporin, and paired it with its ideal technological match, diffusion-weighted MRI.

Aquaporin is a natural protein that controls the flow of water molecules into and out of cells. When it is joined with a gene researchers want to study, the result is a reporter gene. If the gene is expressing — if it is active and “on” — aquaporin levels go up, increasing the movement of water molecules. Diffusion-weighted MRI is well-suited to mapping water activity and renders an image that is darker in areas of genetic activity.

The new method overcomes many of the limits and challenges of existing reporter genes and MRI techniques. For instance, unlike some metal-based procedures, water molecules are plentiful in all cells and don’t pose the potential for toxicity that metals do. Compared to other procedures, such as the chemical exchange saturation transfer (CEST) process, MR images based on water activity can be rendered using common parameters on standard MRI scanners commonly found in labs and clinics.

To spot abnormalities, diagnose diseases and monitor treatment efficacy, researchers and clinicians often use advanced imaging technologies. MRI is noninvasive and doesn’t require radiation, making it a good choice in many circumstances. MRI might be best known for its ability to create images of anatomical structures and physiological functions, but it also can illustrate molecules and cells. Although the spatial resolution of MRI is very good, its sensitivity often needs a boost. That’s why there is intense research into finding ways to increase contrast, especially by using reporter genes like the aquaporin-expressing gene invented by the Caltech team.

To test the effectiveness of their new aquaporin-expressing reporter gene, the researchers experimented on nerve cancer cells, brain cancer cells and hamster ovary cells. They modified each type of cell to overexpress aquaporin. A control set of the same cell types expressed a commonly used green fluorescent protein. Next, the researchers imaged the cells with a Bruker 7T horizontal bore MRI scanner. Cells that expressed aquaporin produced a markedly darker area on the scan, which confirmed that aquaporin is an effective reporter gene.

Additional experiments demonstrated that even at lower levels of genetic activity — levels that correlated with lower increases of aquaporin — there was enough of an increase in water movement to generate dark areas. Then researchers checked to see if using only a small subset of genetically labeled cells would be enough to change a scan. The scientists created cell mixtures with varying percentages of aquaporin-expressing cells. The results were impressive. Even when only 10 percent of cells were expressing aquaporin, there was a significant contrast in the images.

Knowing that even small levels of genetic activity and low percentages of reporter cells can provide good image contrast in vitro, the researchers wanted to know how aquaporin-expressing cells would function in vivo. They implanted hamster ovary cells into the brains of immunodeficient mice. After growing for five days, the tumors looked about the same on images. But once the researchers administered a chemical designed to spark genetic activity, the effect of aquaporin expression was clear. The tumor composed of the aquaporin-expressing cells appeared significantly darker than the control tumor. Further tests showed that aquaporin didn’t change how fast or large the tumor grew.

Although the findings show the new approach is quite sensitive, the authors are interested in making the method even more sensitive. They want to learn if modifying aquaporin or adjusting diffusion-weighted MRI parameters can improve contrast even when genetic activity is very low or when very few cells are labeled. Aquaporin didn’t cause any negative side effects in the in vitro or in vivo experiments, but determining if aquaporin is safe in other cell types requires more research.

By creating a new recorder gene based on aquaporin water channels and demonstrating its effectiveness when paired with diffusion-weighted MRI, the team has detailed an important new MRI approach for tracking genetic activity. Given the fundamental role of genes in research and health, improving ways to monitor genetic activity is critical. New recorder genes that help illustrate activity are key to understanding specific genetic circuits and functions. Recorders that are safe and easy to use in small animals today might turn out to be useful contrast enhancers in human MRI in the future.