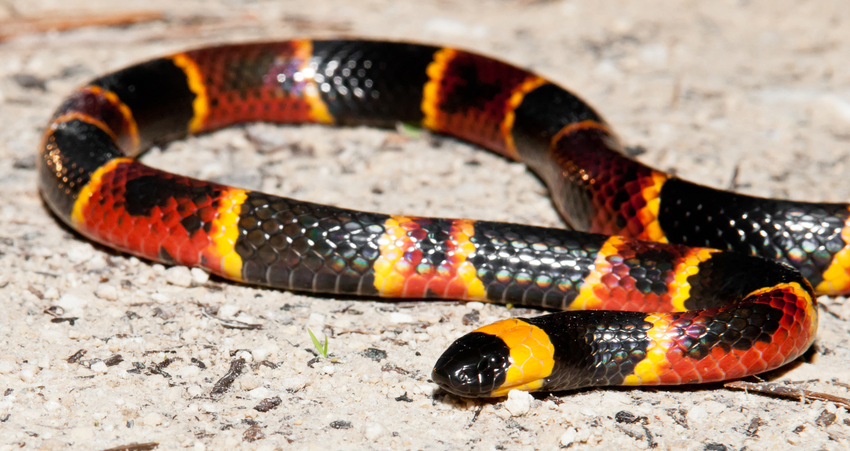 Minutes after the fangs of a snake puncture the skin of his leg, a man rushes to a nearby emergency room. Thankfully, an effective anti-venom is on hand. The man responds well and is discharged. But just eight hours later, he returns again with symptoms of a snake bite.

Understanding the movement of venom within a body is more than a theoretical exercise. It has direct applications in caring for patients bitten by snakes and, more broadly, for understanding how toxins move through the lymphatic and blood systems. Increasingly, scientists are exploring the possibilities for the therapeutic use of venom, making it more important than ever to learn about its biodistribution. Molecular imaging technology provides a tool to track the biodistribution and kinetics of venom toxins in vivo over extended periods of time, the very abilities needed for the study of the aftermath of a snake bite.

The ideas, research and conclusions of a team of researchers from Mexico and the United States appear in the paper, “Biodistribution and Lymphatic Tracking of the Main Neurotoxin of Microbus fulvous Venom by Molecular Imaging.” The paper was published in Toxins, March 26, 2016, and is available at http://www.mdpi.com/2072-6651/8/4/85/htm.

In this study, researchers use venom from the Eastern coral snake Microbus fulvous. Its venom can be lethal, owing to the β-neurotoxins (β-NTx) that can cause respiratory paralysis. Snake venoms are known to be absorbed and distributed through the lymphatic system. But many unknowns remain, including the patterns of distribution, whether the venom alters the lymphatic system and what first aid might be most effective. Tracking the movements of venom molecules using a PET/SPECT/CT system can provide information about how venom operates.

Isolating the toxin and radiolabeling it for imaging

The researchers isolated β-NTx from the venom of the Eastern coral snake. They bioconjugated β-NTx and BSA with DTPA by deprotonation to the lysine amino acid to form an amide bond by a nucleophilic attack to one carboxyl of the activated DTPA.

To better visualize the biodistribution of the bioconjugated toxin, the researchers prepared a radiolabeled version of it to create β-NTx-DTPA-67Ga. They gathered images using a Bruker BioSpin hybrid system Single Photon Emission Computed Tomography/Computed Tomography, better known as SPECT/CT.

The researchers selected 67Ga, an unexpected choice, assessing it to be ideally suited to molecular imaging studies thanks to its half-life and three main gamma rays. This research is the first to demonstrate the potential of 67Ga as a radionuclide to label toxins from venoms for biodistribution and pharmacokinetic studies.

While many studies of snake venom rely on intravenous injection of venom, the researchers wanted to replicate more closely the subcutaneous, intramuscular deposit of venom characteristic of an actual snake bite. When venom is introduced in this way, proteins are readily absorbed through blood and lymphatic systems. The Ga-labeled toxin was injected subcutaneously into the back paw of the first group of anesthetized rats. The second group, Ga-free rats, served as the control. SPECT images of the biodistribution of the radiolabeled toxin were acquired using the Albira PET/SPECT/CT system. A double energy window, centered at 93 and 184 keV, was used for SPECT imaging acquisition.

Whole-body images of the rats were taken 0, 1, 3, 5 and 24 hours after injection. Tomographic SPECT/CT images were taken after 3 hours. The rats had been fed food that contained iodine contrast, which improved the identification of abdominal organs in the CT image.

Distribution of molecules like venom toxin through the blood and lymphatic systems and delivery to organs and tissues is dependent on a number of factors, such as size, exposure site and method, pathway and solubility.

The experiments described in this paper, which rely on SPECT/CT molecular imaging, show the greatest accumulation of toxin is in popliteal and lumbar nodes 3 hours after injection. This demonstrates the importance of the lymphatic system in the biodistribution of the radiolabeled toxin β-NTx-DTPA-67Ga in vivo, in real time, over 48 hours. This is in contrast to what happens with the GA-free group, in which distribution was through the blood system. Findings also reveal that the overall buildup of toxins in organs at 24 hours was quite low, about 1%. One exception: the kidneys, where the average buildup was 3.7%. While this implies that the kidney appears to have an enhanced role in metabolizing and eliminating toxins, better understanding will require additional research.

Importantly, a major portion of the original venom wasn’t found throughout the body. It remained at the venom injection site, which serves as something of a venom depot. The β-NTx at the depot site is released over 48 hours primarily through the lymphatic system. This explains why the snake-bitten man appeared healthy after a dose of anti-venom but later became ill. The continuous release, biodistribution and absorption of venom over time sickened him again.

In a separate experiment, researchers quantified the amount of toxin that stayed at the original injection site. The researchers created three groups of rats. One group got the toxin labeled with Ga. Another group received the protein control, a BSA protein (BSA-DTPA-67Ga) often used to assess lymphatic movement. The third group got the Ga-free.

The researchers took images of the injection site on the paws at varying times. The amount of the toxin present at specific times was compared to the amount of protein by quantifying the radioactivity at the injection site. In addition, at the 24-hour mark, the scientists removed major organs and collected the urine and feces. By measuring the radioactivity level of organs and waste with a gamma counter, the researchers were able to compare the biodistribution of the three substances administered.

The researchers suggest this work serves as a model for using SPECT/CT molecular imaging to study the role of lymphatic and blood systems in the spread of venom toxin. A greater understanding promises to improve the care of patients suffering snake bites. The experiment also serves to outline an important method of monitoring other toxins and to support the growing research efforts involving snake venom.

In the shorter term, when a patient is rushed to the hospital after a snakebite, clinicians might have more advanced information, enabling them to halt the movement of toxins, assess and potentially protect organs from damage, and accurately predict how long to monitor and treat a patient. In the longer term, like the release of venom over time, molecular imaging might help researchers understand more details of toxin movement. That just might uncover beneficial uses of venom, from diagnostic testing to treating diseases.

Like the release of venom over time, research over the longer term might reveal other scenarios. It could uncover beneficial uses of venom, from diagnostic testing to treating diseases.