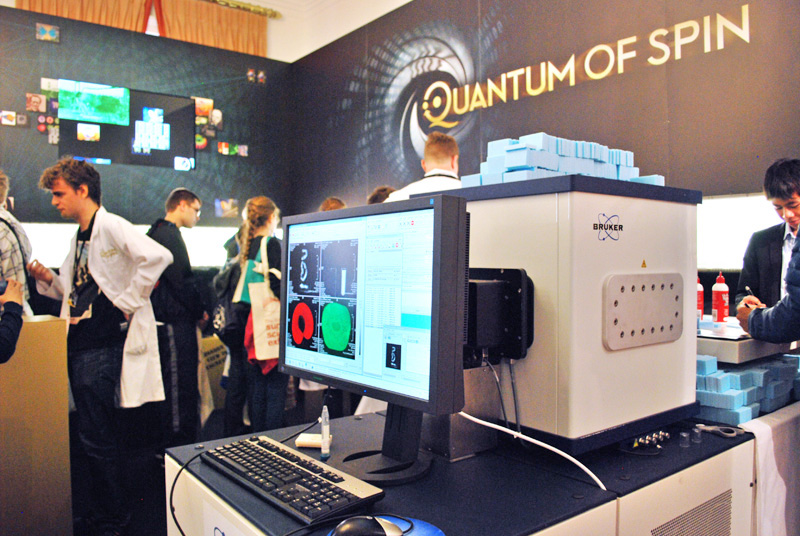 Once a year the prestigious Royal Society in London opens its doors for the Summer Science Exhibition, a showcase of science and technology research. The exhibition gives school children and members of the public a unique opportunity to witness demonstrations first-hand and talk to scientists about their research. And where better than the Royal Society, home of the fellowship of the world’s most eminent scientists and the oldest scientific academy in continuous existence.

Bruker was invited to display the Icon desktop MRI scanner on a joint stand with the University of Oxford, London Centre for Nanotechnology and UCL. The exhibit, entitled “Quantum of Spin”, used an exciting James Bond theme to explain the property of spin and the ways it can be used. Children collected a casino chip from each demonstration to gain their “Licence to Spin”, printed with their name, photo and special agent status.

Carving a secret message to scan using the Icon

Visitors were invited to join in and see MRI live in action. They carved words or symbols into small foam blocks, filled them with PVA glue and covered them with another block to seal their secret message. The blocks were then scanned on the Icon. Each scan took only 30 seconds, so before their eyes the secret messages were revealed on screen. The water molecules in the glue have spin, so they showed up bright white on the scan, and the molecules of the foam, without spin, remained black. Live scanning at an exhibition would not have been possible on any other MRI scanner, but the Icon has a permanent magnet and is extremely compact.

The children also enjoyed scanning two vials, one containing deuterated water and one containing normal water. The MRI scan showed clearly which was poisonous, even though they appeared identical to the eye.

Other demonstrations on the stand used a custom iPad app to visualise the way some birds, including robins, use magnetic fields to navigate, loaded dice to illustrate entanglement and bullets on springs to demonstrate resonance, where visitors pressed a button to match the rhythm and shoot a villain but not Bond.

The Quantum of Spin stand was really popular and it got very busy, often with a queue of children waiting to scan their secret messages! The exhibition was open for 6 days, giving lots of people a chance to have a look round and talk to the scientists. It wasn’t just children – one visitor said she studied science at school in the fifties and came to the exhibition every year to update her knowledge! Another visitor had worked on a magnet that was used by Sir Peter Mansfield, who won a Nobel Prize for his discoveries concerning MRI. There was even a royal visit from Prince Andrew, Duke of York.

You can find out more about the exhibition on the Royal Society’s website. The Summer Science Exhibition also included exhibits about the science of laughter, robots playing football, the sound of bubbles and healthy aging.

Explaining the principle of MRI to the public