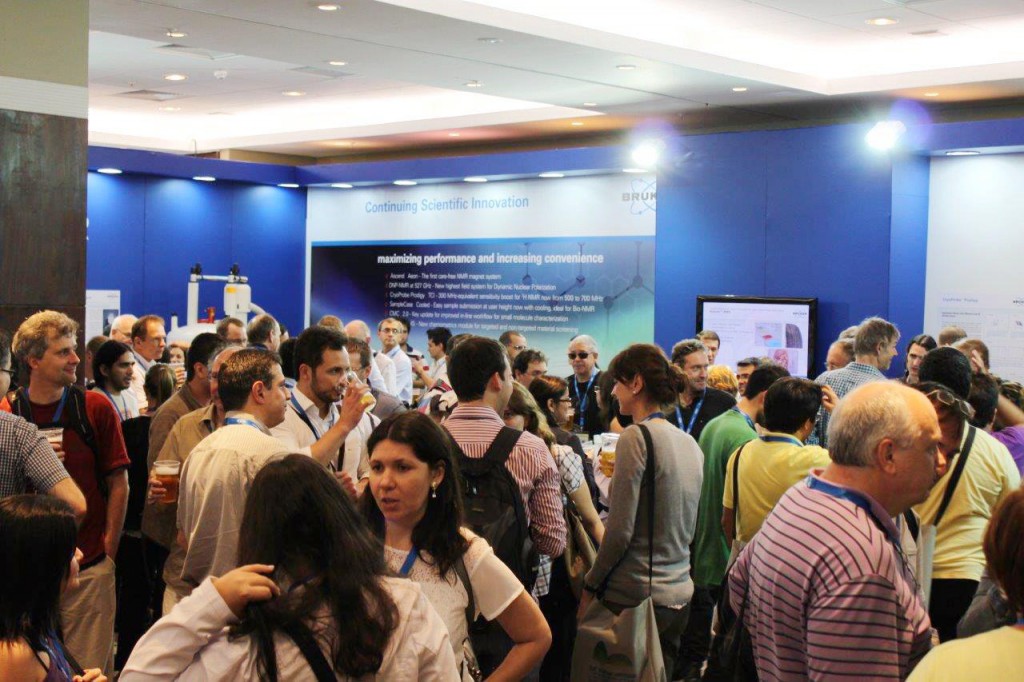 “The ISMAR society is devoted to the advancement of magnetic resonance and its applications and it hosts a triennial international meeting that brings together magnetic resonance practitioners from all domains, including NMR, NQR, ESR, MRI, ICR and aspects of coherent optics. This year attendance at the conference reached just short of 500 delegates.”

Theresonance t-shirt makes it to Rio!

That’s a ‘Hi’ from Rio De Janeiro in Brazil, the stunning location for the 18th ISMAR Conference, held at the end of May 2013.

For 2013 Bruker had made plans to ensure that Rio would be a memorable conference. Starting with a pre-meeting Symposium on the Sunday afternoon, we are delighted to say that the large attendance was the start of a very successful week.

Over 150 delegates joined us just a few hours before the official start of the conference to enjoy a leisurely lunch and snap up the chance to catch up with our latest technologies and methods.

Over 150 people joined us for the Bruker Luncheon Symposium

The opening ceremony of the conference itself soon followed and then it wasn’t long before Bruker found itself busy once more, as the Bruker booth was inundated with delegates keen to enjoy some of Bruker’s warm hospitality.

For the 2013 conference special ‘sponsor’ evenings proved to be thin on the ground. Indeed only Bruker had made plans to provide delegates a well-earned respite from the usual intense focus of daily talks and workshops.

Monday night saw Bruker put on its’ most successful evening of relaxation and entertainment at an ISMAR conference.

An amazing record number of delegates joined us for our special evening which saw 420 people enjoy an impressive sit down dinner at the Conference location, the Royal Tulip Hotel.

A record number joined us for dinner. Luckily we had booked a huge room!

The buffet dinner was a delicious selection of local dishes and the wine flowed to help everyone relax and enjoy some quality time in the care of Bruker.

The mood was buzzing and lively from the off, and the disco that began straight after the food, at 8.00pm, just added fuel to the fire! Talk about ‘rocking the house!!?

We’ve never seen so many of you dancing – wow, we hope you all had a great time! So many of you thanked us for such a great party and the wonderful evening’s diversion, we just had to try and include some of you in our photo gallery and even our party video! Be sure to check them all out here, and you’ll find them on Facebook too, so you can tag yourself and your colleagues and share the great evening with everyone.

Bruker tried very hard this year to make sure the conference was a big success. It was a special evening for all of us. We can’t wait to do it again…

The Bruker booth itself featured a new, full size Ascend Aeon 400 magnet system with Nanobay console and Smartprobe, with a host of information on other key new innovations including the Prodigy and DNP.

As it was Brazil, the fussball table in the corner also took quite a hit. We don’t remember seeing it sitting unused… ever!

The bar in the booth also served Bohemia beer – the local brand – which also helped everyone to stay refreshed!

Enjoying some welcome downtime with Bruker

ISMAR Prizes
The official triennial ISMAR Prize is awarded to senior scientists who have significantly contributed to the Magnetic Resonance field. The 2013 prize was awarded to Jack Freed for the ‘foundation of modern EPR through an extraordinary range of contributions from mathematics and theory to methodology and instrumentation; and for the application of his ingenious methods of pulsed EPR spectroscopy to fundamental problems in areas from chemistry to biophysics’.

The new ISMAR Anatole Abragam Prize sponsored by Bruker pays tribute to the outstanding achievements of the late Anatole Abragam. The very first triennial prize was awarded in Rio, to materials scientist Vikram Bajaj, a researcher at the Alex Pines lab for ‘his achievements in magnetic resonance methodology, including contributions to high field DNP, remote detection of microfluidic flow, optical encoding and detection of magnetic resonance, and new implementations of the xenon biosensor’.