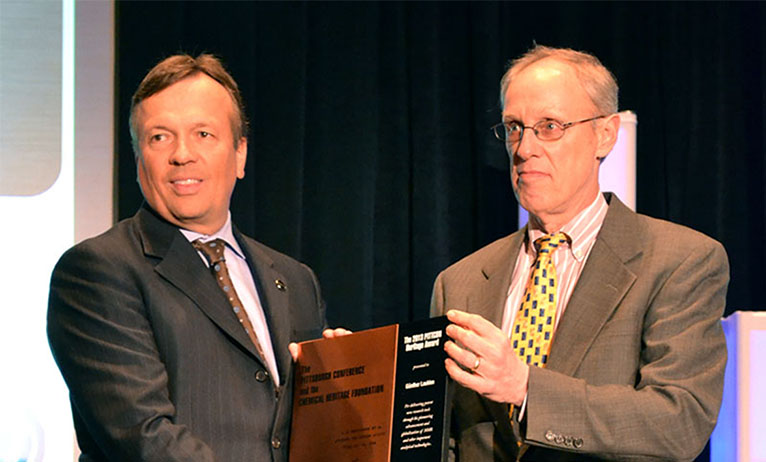 Frank Laukien accepts the Pittcon Heritage Award on behalf of his father, GüntherLaukien

“At the 2013 Pittsburgh Conference on Analytical Chemistry and Applied Spectroscopy, Pittcon and the Chemical Heritage Foundation (CHF) have chosen to honor the founder of Bruker, Günther Laukien (1924–1997), with the 2013 Pittcon Heritage Award. This week, at the meeting in Philadelphia, his son Frank Laukien, Ph.D., president and CEO of Bruker Corporation, received the award in his name at a special ceremony.”

Frank Laukien accepts the Pittcon Heritage Award on behalf of his father, GüntherLaukien

“Dr. Günther Laukien is one of the great pioneers in the field of nuclear magnetic resonance spectroscopy,” said Thomas R. Tritton, president and CEO of CHF. “In the early 1960s he saw a need for high-power solids and high-resolution liquids NMR spectrometers and founded the original Bruker Physik AG to develop, make, and distribute the new devices. Within a decade his innovative NMR and EPR systems were sold around the world, and were later complemented by preclinical MRI, FT-IR, FT-Raman, and mass spectrometers.”

The Heritage Award is presented annually at a special ceremony during Pittcon. The recipient’s name and achievements are added to a roster of Pittcon Hall of Fame members that includes such industry pioneers as Arnold Beckman, Robert Finnigan, Chester Fisher, Aaron Martin, James Waters, and others.

Günther Laukien is recognized as a pioneer in solid-state and high-resolution NMR spectroscopy instruments and a visionary entrepreneur who created instruments for a worldwide market.

A successful history of studying Physics saw him appointed Professor at the Institute of Experimental Physics in Karlsruhe in 1960. At that time his knowledge and expertise initiated the development of a completely new ‘pulsed’ spectrometer and he initiated the beginnings of Bruker AG, building magnets and creating the first commercial pulse spectrometer.

In 1965 he created a new, revolutionary NMR system. The HFX 90, had three independent channels, was completely transistorized (solid-state electronics), and provided new research capabilities only previously available in experimental systems. This new spectrometer quickly gained wide acceptance, creating a substantial market for Bruker in the Europe and US, followed by worldwide success.

After attending his first Pittcon in 1969, it wasn’t long before, in 1972, he was able to return with a new class of high field FT-NMR instrument, the WH product line. Beyond the WH-90 high resolution iron magnet, the range’s expansion to higher field strengths utilized the first superconducting magnet technology, available in the WH-180 (wide bore), and the -270 and -360.

This technology enabled the path towards high field NMR and was, effectively, the precursor of modern NMR spectroscopy and of today’s systems. Indeed these early systems established the high-field magnet standards of today, such as 5 cm bore, and top and bottom access, standards that have since been adopted by all manufacturers.

Under his continued leadership Bruker expanded into new technologies from mass spectrometry to FT-IR, FT-Raman, and preclinical MRI systems.

But alongside continued technological innovation, he remained very much focused on the local scientist and researcher. He recognized the importance of localized training and service on a global scale. Establishing local training programs and user meetings worldwide, he actively supported and widened the customer base for NMR – bringing the technology to new industries and new areas of research. He successfully pushed NMR to researchers throughout the world broadening its many applications.

In 1980 Günther Laukien was awarded the ISMAR prize, which is given every three years for outstanding achievement in the field of magnetic resonance. Today the highest award within the NMR research communities is given in Prof. Laukiens’ name – the Günther Laukien prize.