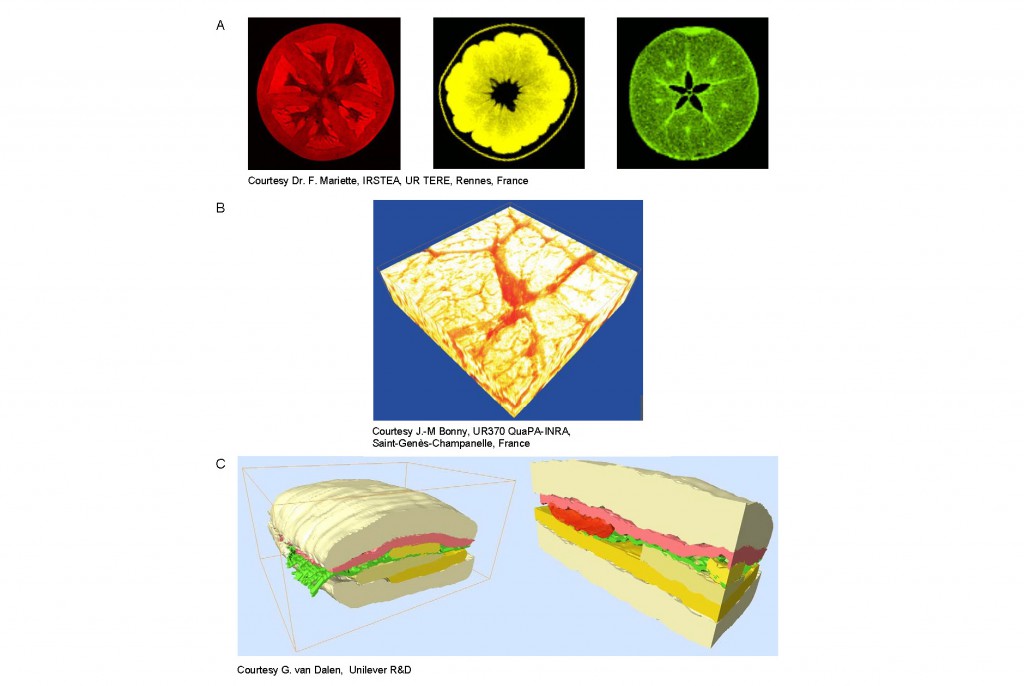 The structure of food using MRI

Within the domain of food structure one seeks to unravel the structural organisation and dynamics of components in food stuffs. This represents a challenge due to the large range of distance and time scales that are involved.

A relatively simple example is given in Figure 1A where the different (length) scales of structural organisation in cereals are represented. The starch in cereal kernels such as wheat and rice, for example, is organized in starch granules which contain amorphous regions as well as domains where the starch chains are organized into helical structures.

All these structural levels are of relevance when cereals are processed into edible foods, as is the case, for example, in rice cooking or the preparation of dough and finally bread.

Within food science an array of spectroscopic and microscopic techniques is deployed but, as is shown in Figure 1B, NMR distinguishes itself by covering virtually all length scales and its ability to assess dynamic events, particularly those involving water, in a non-invasive manner.

Figure 1 Overview of length scales that can be encountered in cereal materials and products. (A)Cereals as an example of food materials with structure and dynamics occurring at different length scales. (B)Operational ranges of magnetic resonance spectroscopy and imaging methods. Reproduced with permission from van Duynhoven (2010).

Supramolecular and Nanostructural Order and Dynamics
High-resolution 13C CPMAS solid state NMR experiments have successfully been used to assess crystal polymorphism in lipids, which is an important feature for explaining and understanding melting behaviour, of for example, chocolate and margarines. Such solid state NMR techniques have been deployed to study the semi-crystalline order in carbohydrate biopolymers such as starch and cellulose.

Combinations of 13C CPMAS and 1H relaxometry (T1, T1 ρ, T2) measurements have been proven useful in the study of molecular dynamics in ordered biopolymers, in particular for assessment of semi-crystalline order and mobile amorphous states.

Figure 2 provides an example of how a two-dimensional experiment which combines 13C CPMAS and 1H relaxometry can be used to visualize and quantify hydration of starch in rice at the nano/mesocale.

Although providing less detailed information at the molecular level as the high-resolution NMR methods, 1H NMR relaxometry is still a convenient and quantitative tool for overall assessment of crystallisation and ordering phenomena in foods.

The measurement of Solid Fat Content by relatively cheap benchtop NMR equipment has become a routine method for quality and process control in development and manufacturing of fat-based food products.

In recent years two-dimensional approaches have also been used to assess relaxometric (T1-T2) and diffusional behaviour in a joint manner. An advantage of these approaches is that, in the resulting T1-T2 and T2-D maps, one can resolve otherwise overlapping microstructural features and observe exchanges between different populations.

A particular strong diffusometric application is the quantitative assessment of oil and water droplet size distribution in food emulsions by exploiting the restricted self-diffusion that occurs in droplets.

An overview of the structural detail that can be obtained for food emulsions is illustrated in Figure 3.

Figure 3 Schematic representation of different modes by which NMR diffusometry can be used to probe emulsion microstructure (Reproduced with permission from Voda and van Duynhoven, 2009).

The aforementioned relaxometric and diffusometric applications are highly amenable for implementation on relatively low-cost benchtop NMR spectrometers, designed for use in manufacturing environments.

Currently, the most prominent applications are water and oil droplet sizing in food emulsions such as margarines and mayonnaises.

Moisture Transport During Food Processing and Shelf-life
MRI is a non-invasive imaging technique, which visualises the internal micro- and macrostructure of food products. Figure 4 shows examples of MR images of several food products.

The contrast in these images is mostly based on the diffusional and relaxation NMR properties of water, and can be used to understand and predict food quality. This has opened up the possibility of non-invasive quality inspection of fruits, vegetables, cheeses, fish and meat.

The ability of MRI to resolve the internal features in food materials is best exploited when microstructural events need to be assessed in a dynamic manner, such as during processing (Figure 5) and shelf-life (Figure 6).

Figure 5 Example of dynamic MR images of food stuffs:cooking of rice. Times are indicated in minutes. Reproduced with permission from van Duynhoven, 2010.

Such dynamic MRI experiments are typically performed in order to develop and validate models for heat and mass transport in foodstuffs, for example, during drying, storage, heating, proofing, cooking, frying and baking.

In all these applications one carefully needs to select an adequate MRI experiment and tune it towards delivering meaningful and quantitative information.

Figure 6 An example of MRI being used for verification of a model describing moisture transport in foods. The panels show experimental (left) and simulated (middle) sorption profiles in porous cracker (XRT, tomography, right). Reproduced with permission from Esveld et al., 2012.

In the first case one finds drying processes and moisture and oil migration during shelf-life of food stuffs. Here one typically takes recourse to solid-state MRI, where Single Point Imaging techniques have acquired a prominent position.

MRI has been particularly useful for monitoring structural events that take place during cooking of noodles and rice, proofing of dough and the baking of bread.

Parts of this paper were reproduced with permission from Elsevier from van Duynhoven JPM. Food and Nutritional Science, Applications of Magnetic Resonance. Encyclopedia of Spectroscopy and Spectrometry, 2nd edition, Vol 1. Oxford: Elsevier; 2010, pp. 663–670.