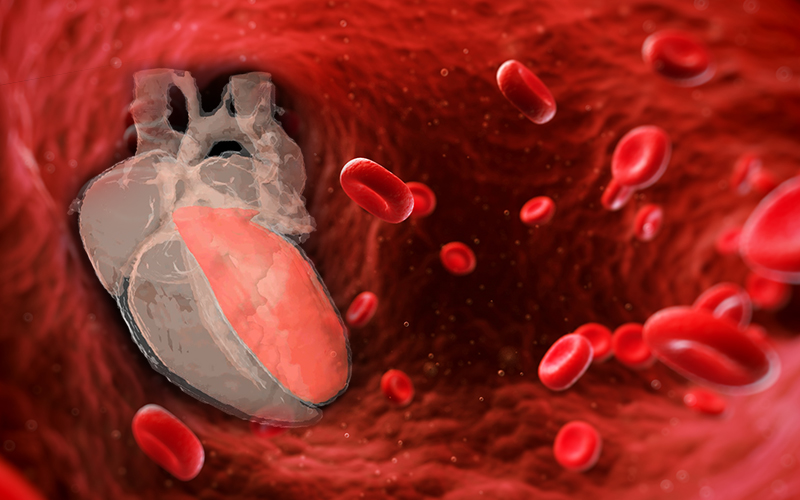 In preclinical studies, visualization of the vasculature of a mouse or rat provides important physiological information that can be used to study plague formation, aneurisms and heart-related disease. High resolution microCT imaging is one modality that can be used and is the only one to provide rapid 4-dimensional data.

In mice and rats, as in humans, there is not enough difference in density between the blood pool and the surrounding tissue. To overcome this limitation, clinicians and researchers inject contrast agents intra venous. The typical clinical angiograph will be a set of 2-dimensional (2D) images acquired at short intervals, visualizing the contrast agents as it fills the vessels. Because of the rapid clearance of these contrast agents through the kidney, a single bolus injection can only be visualized in 2D. If we want to obtain data in 3 dimensions (3D) the contrast agent should stay in the blood pool for a much longer time. In a pre-clinical setting, special contrast agents have been designed especially for this purpose and can be used in mice and rats. To obtain functional data of the beating heart, the microCT scan can be done while synchronizing the image acquisition. The result is a 4-dimensional dataset, which provides 3D information of the different phases (systole-diastole) of the beating heart.

Choosing the correct anesthesia is crucial to avoid irregular breathing and possible heavy contractions during the scan. Often gas-anesthesia (isoflurane) is used because it is easy to adjust the concentration, and the animals recover quickly. However, injectable anesthesia can also be applied: Nembutal is preferred over a Ketamin/Xylazine combination as the latter results in increased breathing frequency, making synchronization difficult.

Retrospective synchronization is applied, acquiring up to 20 images per rotation step, covering the entire heart-beat cycle at every rotation angle. The time-point at which each image is saved is logged in a first ‘time-line’. During the scan the software also registers and assigns a ‘time-stamp’ to every heart-beat, this is the second time-line that is recorded. After the scan is finished, both time lines are linked and the appropriate image is assigned to a certain phase (bin) of the beating heart. After sorting the projection images in the different phases, the datasets are reconstructed, resulting in a 4D beating heart. An important point to mention is the patented low dose filter. The use of this filter allows scanning at high resolution without significantly increasing the radiation dose, thereby allowing multiple scans of the same animal.

The beauty of microCT is that the data is available in 3D, so a virtual re-slicing of the data in any 3D orientation is possible without compromising on resolution. This is because microCT data is isotropic (the X, Y and Z axis have the same dimension). After adjustment of the 3D orientation in Dataviewer, the different phases of the beating heart can visualized. Isolating the left ventricle by drawing a region of interest (ROI) and thresholding the blood, allows us to calculate the blood volume at every phase, and from this the ejection fraction. The same ROI can be loaded on every dataset (corresponding to the different bins) because all bins originate from the same animal. The thresholding and possible additional image processing steps can easily be transferred to the custom processing tab in CTAn. Once the protocol or ‘task list’ is generated, we can use BatMan to load all datasets and fully automate the analysis process. For visualization purposes, adding a ‘3D model’ in the task list, multiple 3D surface rendering models will be generated corresponding to the change in blood volume of the left ventricle.

Besides the volumetric data obtained from these 4D datasets, the change in the diameter of left ventricle during the different phases of the beating heart can also be analyzed. For this, the software applies a 3D sphere-fitting method resulting in a distribution of the diameter of the left ventricle, calculated over the different phases, representing diastole/systole. This same technique can be applied to the ascending or descending aorta, allowing the measurement of the change the aortic diameter. Other applications such as aneurisms or plaque formation whereby the diameter of the blood vessels are increased / decreased can be monitored in the same way.

The SkyScan microCT scanners can scanch at low radiation dose without compromising resolution or image quality. The in vivo scanners include synchronization with movement, breathing or ECG. The SkyScan software not only allows 3D and 4D viewing of the data, but also allows accurate calculations of morphometrical parameters including tidal volume, functional residual capacity, ejection fraction of the left ventrical and thickness distribution changes.