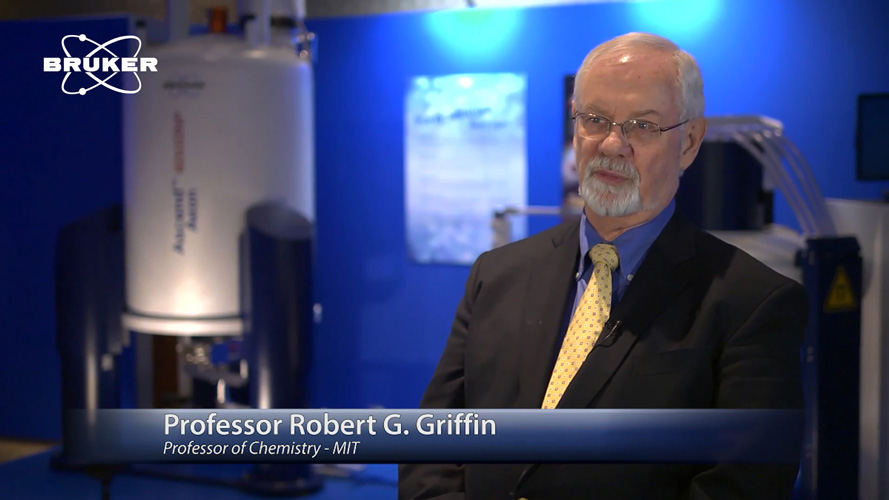 With Professor Robert Griffin, a recognized pioneer and thought leader in the development of DNP-NMR

We interview Professor Robert Griffin, a recognized pioneer and thought leader in the development of DNP-NMR.

Can you give a brief introduction to yourself and your work on Dynamic Nuclear Polarization?
I’m Professor Robert Griffin and I teach physical chemistry at the Massachusetts Institute of Technology. We have been working on dynamic nuclear polarization (DNP) for almost 30 years now, since 1986, when we received our first NIH Grant to build the equipment needed for DNP.

Can you explain briefly how DNP works?
DNP, or dynamic nuclear polarization, is an NMR technique which transfers polarization from the electron spins onto the nuclear spins, using constant microwave irradiation to enable the transfer.

Since the magnitude of spin polarization in the electrons can be much greater than in the nucleus, this effectively boosts the nuclear spin polarization of the sample way above what you would see at thermal equilibrium under normal NMR conditions.

This makes the NMR measurements much more sensitive – anything from 20 times, up to 100 times better, which enables us to see details in molecular structures that would require impossibly high fields in conventional NMR spectroscopy.

How was DNP first developed?
The use of DNP was proposed by Albert Overhauser in the 1950s.The first experiment using the technique was performed in the physics department at the University of Illinois by Charlie Slichter and his student Tom Carver.

They irradiated lithium metal with low frequency microwaves, using a very low field, of about 30 Gauss, because the electronics are very simple to deal with at that frequency.

Everybody was very excited about it and during the 1960s and towards the end of the 1970s, people started trying to perform DNP at higher and higher frequencies, which they achieved with modest success.

The problem really was that they were using solutions, often aqueous solutions, and there was a lot of dielectric heating from the microwaves – similar to when you heat a cup of coffee in the microwave oven.

There were a lot of technical problems associated with that.

At the same time, superconducting NMR magnets were being introduced which meant that if you were going to use DNP you had to have higher and higher microwave frequencies available.

Until quite recently, when we started working on DNP, you could only buy commercial microwave sources, which limited you to 60 MHz for proton NMR and that is just not very interesting to people today.

When we got into DNP, I made a decision and argued that if we were going do this, then we needed to develop microwave sources that would allow us to move up to the frequencies used in contemporary NMR experiments.

That would mean 400 MHz initially, then 600, 800, and eventually up to the 1.2 GHz NMR fields that are going to be produced by Bruker in the near future.

We then made a big investment in technology. We decided we needed a gyrotron microwave source and luckily, being at a place like MIT, my colleague Richard Temkin who was across the street, knew how to build a gyrotron.

What we did next was to assemble a system that works at 211 MHz using a 140 GHz gyrotron. That was the first DNP spectrometer and is still actually operating as a high frequency DNP spectrometer today. That’s more or less the origin of DNP.

What were the main milestones in the development of DNP?
The first big milestone was actually getting the 140 GHz gyrotron and the 211 MHz spectrometer associated with it to operate. That was a huge milestone for us and in 1993 we published the first paper about it in Physical Review Letters.

That paper described us using a radical called ‘BDPA’ which we put into polystyrene. However, this was all being paid for by the NIH and they were not very interested in a chemical polymer like polystyrene; they really wanted to polarize proteins.

A couple of years later, in 1995, we finally got something operating that could be applied to proteins and that was another big milestone. We figured out that you could use water soluble TEMPO free radicals to polarize water glycerol solutions and get very large enhancements. We obtained an enhancement of 180, which is pretty respectable even by today’s standards.

At this point, although we had a functioning gyrotron, it was actually a homemade device that was very difficult to operate and could only really do so for about 30 minutes or an hour if we were lucky. After that, you had to turn it off to let it “rest” for a while and let its vacuum recover.

The next big milestone was therefore constructing a device that was properly configured and could pump out the vacuum very well. This gyrotron behind us, for example, typically runs at a vacuum of 10-8 and preferably 10-9 or 10-10 Torr.

We built a new 250 GHz tube that actually runs continuously. We ran it for almost ten years and then it had a vacuum failure but we have since put it back together and it’s been operating very nicely, for about six or eight months continuously now.

Getting a gyrotron microwave source that was very stable and relatively easy to operate, was really an important milestone in the next stage of developing the technique and it allowed us to start recording spectra of proteins.

In 2008 and 2009, we published some of the very first, really nice DNP enhanced spectra of bacteriorhodopsin, which is a very famous membrane protein.

Perhaps a fifth big milestone was achieving really routine, low temperature operation which is crucial for DNP as you need very good temperature stability over long periods of time – about a week. So, all of these technical achievements have come together to develop and produce this equipment.

Another very, very important part of DNP is having paramagnetic molecules in the form of stable free radicals, that serve as a source of polarization. Some of the most effective polarizing agents were developed by Kan Hu, a graduate student in the group from 2004 to 2008, in the form of biradicals. This was a collaborative effort with my colleague Tim Swager, who is an outstanding organic chemist.

We took two TEMPO molecules and tethered them together. Their electrons interact with one another and they become dipole coupled, which allows us to perform cross effect DNP experiments.

For these experiments, you flip one electron and then another electron, which leads to a difference in frequency that polarizes the nuclear spin and that is called a cross effect. This has been the biggest improvement in enhancements and sensitivity that we have seen so far.

Paul Tordo and his colleagues in Marseille have recently synthesized a very nice biradical. It’s actually two TEMPO’s tethered together with a urea molecule and that’s providing us enhancements of 420, which basically brings us up to where we are today.

What impacts will DNP have on our everyday lives?
Well, DNP probably won’t have a direct impact on anyone’s life but it will have a very important indirect impact, in that it will allow people to do structural biology experiments that they couldn’t even think about doing without it.

For example, at this meeting, we have already heard several references to amyloid proteins which are involved in Alzheimer’s disease, Parkinson’s disease, type-2 diabetes and dialysis-related amyloidosis… all these terrible age-related diseases that are very, very debilitating and lead to severe dementia.

What DNP will probably let us do in a much more efficient manner, is to determine the structures of those amyloid proteins. Once you determine their structure, you can start thinking about drugs that might bind to them and inhibit fibrillization or dissolve fibrils, for example.

There is also another area of DNP called ‘dissolution DNP,’ in which you polarize a sample at very low temperatures and dissolve it in water. You then shoot it over to another magnet or you can actually inject it into a person and view an image of a highly polarized compound, such as pyruvate, for example.

This sort of technique is actually being used at UCSF in California to diagnose prostate cancer and as we become better at performing dissolution DNP, I think several new clinical applications will be found for it.

What direction do you see DNP going in the near future?
One easy thing to achieve is simply to go to higher fields. Right now, we are running at 800 MHz and Bruker has sold three or four 800 MHz spectrometers, 527 GHz and 1.1, 1.2 GHz machines are on the drawing board.

The obvious thing to do would be to extend the techniques to those operating frequencies. Very importantly, we are also beginning to see that it’s important to have a polarizing agent adapted to a certain magnetic field of operation and I think there will be continued developments and improvements in terms of the polarizing agents we use for DNP.

Another very big area we and other groups in the United States and Europe are working on is ‘pulsed DNP.’ Anything that you can do with CW radiation, you can probably do better with pulses. You can manipulate the spin, you can shift phases, you can do all kinds of phase cycling experiments and make the experiment much, much more efficient.

So, in the same way Fourier transform NMR was a tremendous boom to solution and solid-state NMR, I think pulse DNP will probably some day emerge as the method of choice for performing these experiments.

Related Information and Other Stories